In this modern world we take much of what we have for granted and forget that things were once very different for us. Much of what we have now makes our lives very convenient and without them, things would be much harder for us. Our everyday chores would be very much different to todays and the world would be quite unrecognisable to how we see it now. The absence of the technology we have today would often even be a matter of life and death, yet we go about our lives in apparent ignorance that much of what we have even exists. 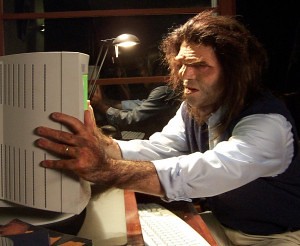 Considering how much easier the technology we have today makes our lives, it would be interesting to see how civilisation would have used computers had they had access to them a long time ago. If dark ages civilisations had the use of computers in their lives, things would likely have been very difficult for them also.

Communicating over very long distances was very much different back in the dark ages and messages would have taken a long time to be received, if at all. Riders and ravens were often sent out with messages and as well as taking some time to reach their destination, they were at risk of being found and killed by the enemy. Important messages often went undelivered and even when they did arrive, they often arrived too late. Of course, when the message did arrive a reply was often expected, making the whole process twice as risky. This made such forms of communications quite risky so it was only usually very urgent messages that were sent and received this way. Whole towns and cities would often spend long periods with no contact from the outside world as a result.

With a computer and an internet connection, however, civilisations would have a much more efficient, safe and effective way to communicate with each other. Riders and ravens would not have to be risked, civilisations could be very confident that their messages would be received and of course, they would be received much quicker. With computers, the people of the dark ages could communicate with each other with ease and not be locked away from what is happening elsewhere in the world.

In the middle ages an education was something that could only be afforded by the very rich. Much of the population couldn’t read or write at all and being able to read alone could earn you some of the very highest positions in society.

Much of the reason for this was that books were very expensive, which made teaching very difficult. If the people of the stone ages had access to computers then education would have been much more widespread with even the poorer peasants being taught to read and write. If this was the case, we could now have much more literature available to us from that period.

The dark ages were known as a very harsh period in which war was common place. People lived in stone castles to protect them from enemy invasion and it was not uncommon for men and women to die at a young age due to war. In some cases, even children fell victim to war.

Had computers existed in the dark ages, life could have been much more enjoyable for everybody alive at the time. It could have made life much easier for people then just as it has with us.

Android Platform: What Are The Basics?