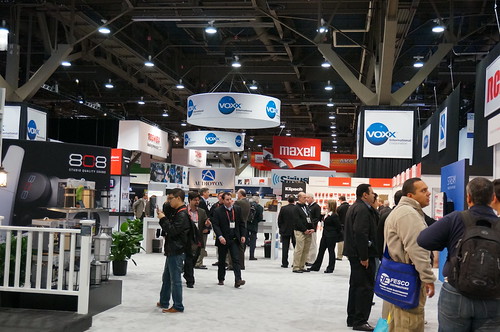 CES (Consumer Electronics Show) is an awesome conference to attend. There are few other events in the world where you can see the most-advanced gadgets about to come to market than at one of Las Vegas’ most well-known conferences. But not every gadget shown on the floor is worth its weight. Here’s a look at a few inventions that failed at CES 2013. Panasonic proudly displayed its 20-inch, 4K tablet, which in theory would be great, especially for designers or architects. Its ample screen and high-definition display is designed to show off tons of detail. Unfortunately, it’s lacking the processing power necessary to display all that data efficiently, even to the point that it lags terribly even when performing the most basic of tasks.

2. What Purpose Does an Electronic Fork Serve? What would you expect an electronic fork to do? Perform fork-related activities? Clearly, this is not the case with the HapiLabs Hapifork. Instead, this electronic fork sends you a signal (a beep) if you’re eating too fast or too much. Unfortunately, the fork has no means of knowing whether you’re scarfing down a plate of asparagus or chocolate cake – therefore, it’s of little value for dietary purposes. If you have toddlers, you’re likely game for anything that makes the enduring task of potty training a little simpler. What about the CTI Digital Toddler Potty, which actually hosts an iPad in its built-in holder? If you’re grossed out, take heart in the fact that the screen is protected with a touchscreen protector. Still not convinced? You’re not alone. 4K, the same technology that Panasonic incorporated into its “new high-def” tablet, is also available on a television: a television which will cost you about $12,000. The problem with this innovation isn’t its functionality, but its cost. Who can afford a $12,000 television, unless you’re Tom Cruise or Oprah Winfrey?

5. Handheld Gaming is So Over Here’s the problem with handheld gaming: Everyone does it, but it’s really not necessary anymore. There are tablets, laptops, smartphones and all kinds of crazy, innovative devices which enable you to play whatever you want, when you want. Why invest a couple hundred bucks in Nvidia’s Project Shield that lets you do little else? No one wants an extra gadget to pack in their carry-on bags. Technology is great and all, but most of you are probably well over the big brother-type tracking devices that – well, basically evade your privacy. Likewise, Audiovox’s Connection Pro vehicle-monitoring system is likely to be a flop. Why pay a dealer twice as much as you’re paying your personal mechanic?

In terms of smartphones, innovations are at a standstill. If you’ve given up on the latest tech gadgets and the thought of owning the next big tech-geek mecca device, go buy a Nokia Windows Phone 8, be done with it and have all the technology you need right at your fingertips. Of course, there are tons of other really incredible tech inventions that debuted at CES 2013 – which could actually prove useful.

Being a software engineer, Todd Hawkins has a love of technology and developing new ways to make life easier, but he also knows that in order to be technology to be truly useful it has to be practical and affordable for its consumer.

7 Apps and Gadgets to Help You Cope in an Emergency

The Key Elements of an Effective Email Marketing Campaign